Your Guide To Public Transportation In Istanbul | How To Get Around Istanbul? 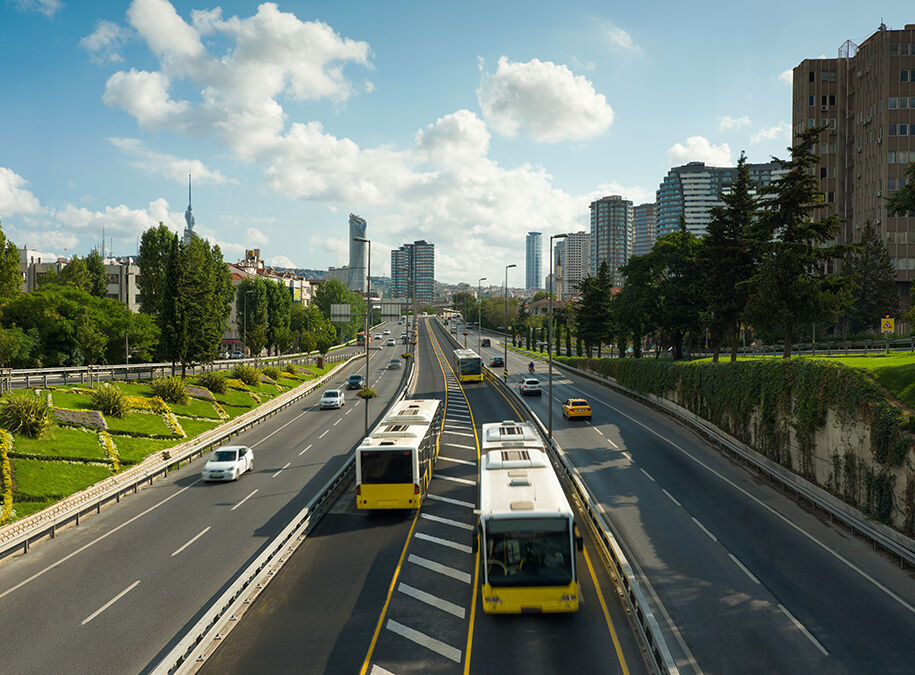 Istanbul is the largest city in Turkey and the cultural and economic hub. It’s an important city due to its historical significance and strategic geographical location. It has the advantage of being on two separate continents and a wide range of places to visit, from restaurants, cafés, parks, museums, nightclubs, and monuments such as mosques, castles, and towers. Istanbul is today one of the most visited cities in the world, and when it comes to the tourism sector, it’s a big rival to the biggest cosmopolitan cities out there! According to official statistics, the city of Istanbul was visited by more than 51 million tourists in 2019 alone. Of course, to accommodate this incredibly large number of tourists added to the already large 16 million population of Istanbul, an efficient and big network of public transportation had to be developed by the state. 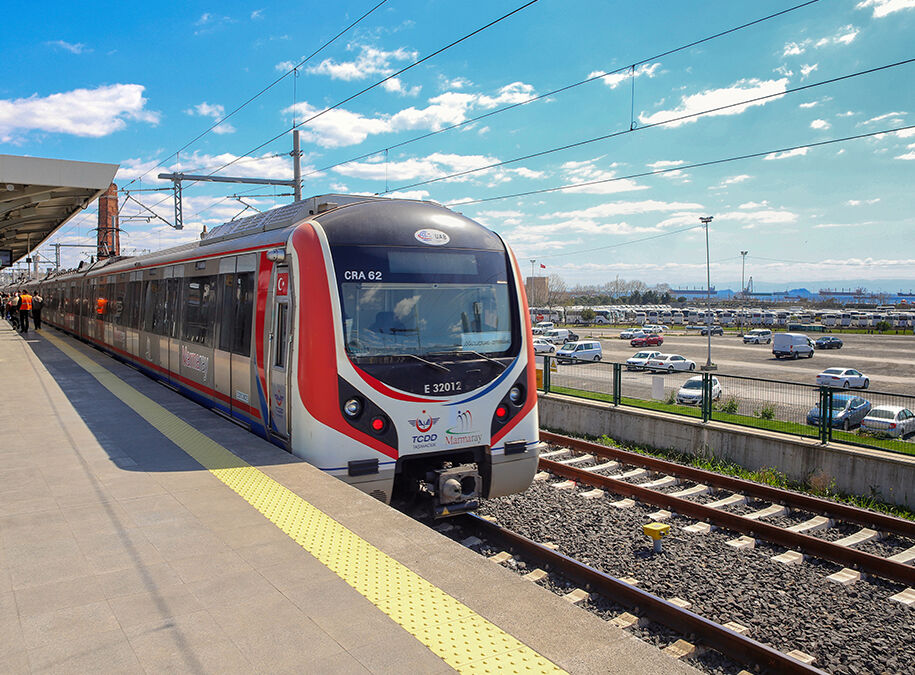 Istanbul is known for having the best, largest, and most efficient public transportation network in Turkey. It consists of railways, metro lines, tramways, metrobuses, buses, ferry lines, and even funiculars. Using the Istanbulkart that was first introduced in 2009, you get access to all of the city’s public transportation. If you are new to Istanbul, you should probably know that in order to use your card, it must be linked to your HES code. To learn more about the HES code, you can read this article: “All you need to know about the HES code”. Once it’s all set up, the Istabulkart is used for all public transportation services in the city, including the Metrobus, the Marmaray and even the ferries. The metrobus and the Marmaray railway are the only ones that cross the 2 sides of the city, while the rest can serve as a connection to the metrobus and the Marmaray. Along with the metrobus, the metro lines are among the busiest public transportation in Istanbul

The marmaray is the longest transportation route in Istanbul. It’s an intercontinental railway that links the European side to the Asian side via an underground tunnel all the way to Gebze. It runs for more than 76 kilometers. Construction of the project started in 2004 in it was partially opened in 2013 and fully in 2019

The Istanbul tram network consists of tramway lines on the European side created by the Istanbul Metropolitan Municipality in 1992. There are currently 3 tramway lines operating. The T1 opened for use in 1992, the T4 in 2007 and the T5 very recently, in January 2021. The T1 links Kabataş to Bağcılar through 31 stations, the T4 connects Topkapı to Mescid-i-Selam via 22 stations with 3 planned, while the T5 connects Eminönü to Alibeyköy through 14 stations with 2 more currently under construction. Also, you can use the iconic nostalgic tram that will get you from Taksim Square to Şişhane station. 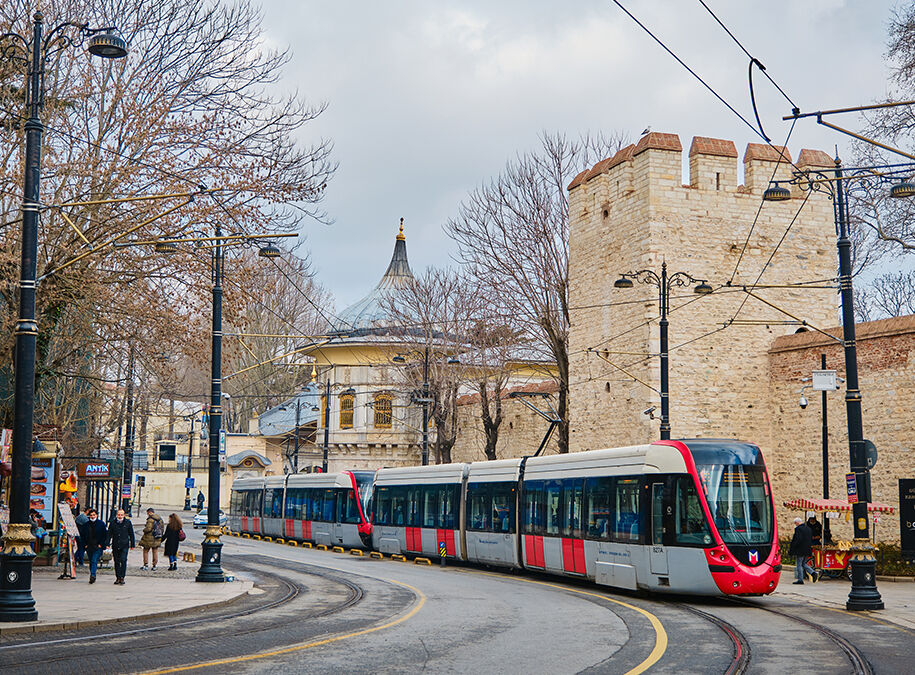 The city also has a large network of ferries that connect both sides of the Bosporus strait. They are also called the sea buses, and the biggest ferry operator is currently IDO which runs a combination of passenger and car ferries. The ferries can be used to travel between areas like Eminönü, Kabataş, Beyoğlu, and Karaköy to other areas on the Anatolian side such as Üsküdar, Haydarpaşa and Kadıköy, and others. 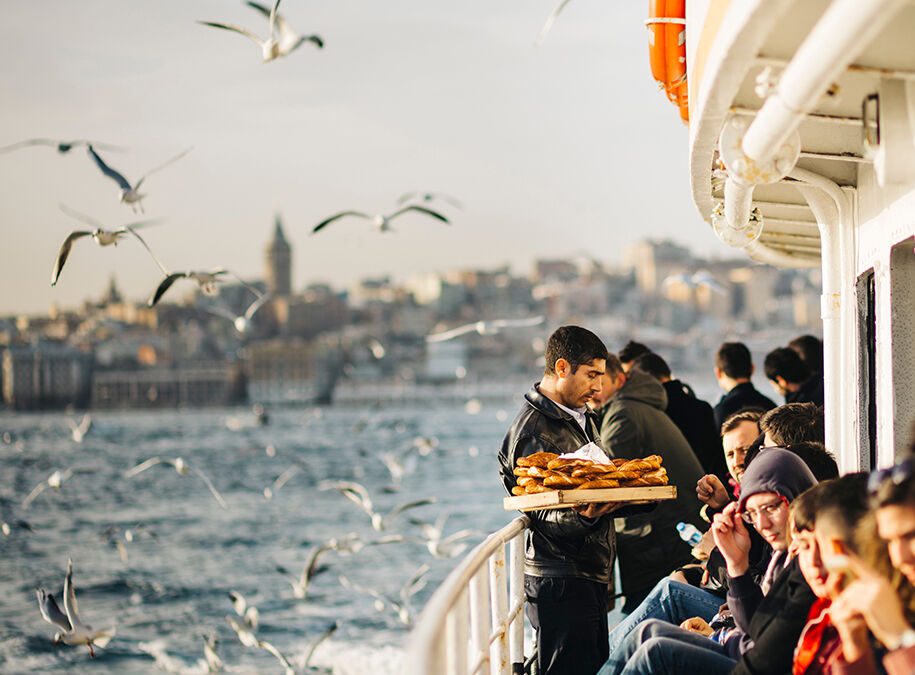 The Istanbul Metro is the rapid transit network that serves the city of Istanbul. Mostly underground, the Istanbul metro is known for its excellent infrastructure, efficiency, and rapidity. Prices for the metro are much cheaper than transportation in most European countries, and tourists will easily afford to move around the city using public means. The first metro line was inaugurated in 1989, called the Istanbul metro M1 line and located on the European side, and it connects the Yenikapı area to the Kirazlı in Bağcılar. The M1 consists of 23 stations currently in service, of which 11 are underground, 9 are ground level, and 3 are elevated. The total length of the line is 26.8 kilometers after the extension from Aksaray to Yenikapı was opened in 2014.

Back then, it revolutionized the public transportation system of the city until more lines came afterward. The construction of the M2, also on the European side, first started in 1992, and the first part from Taksim to Şişli was opened for the public in 1994. New extensions continued to be made over the years, with the last one in 2011. The line now goes from Yenikapı all the way to Hacıosman, with more extensions planned in the future. 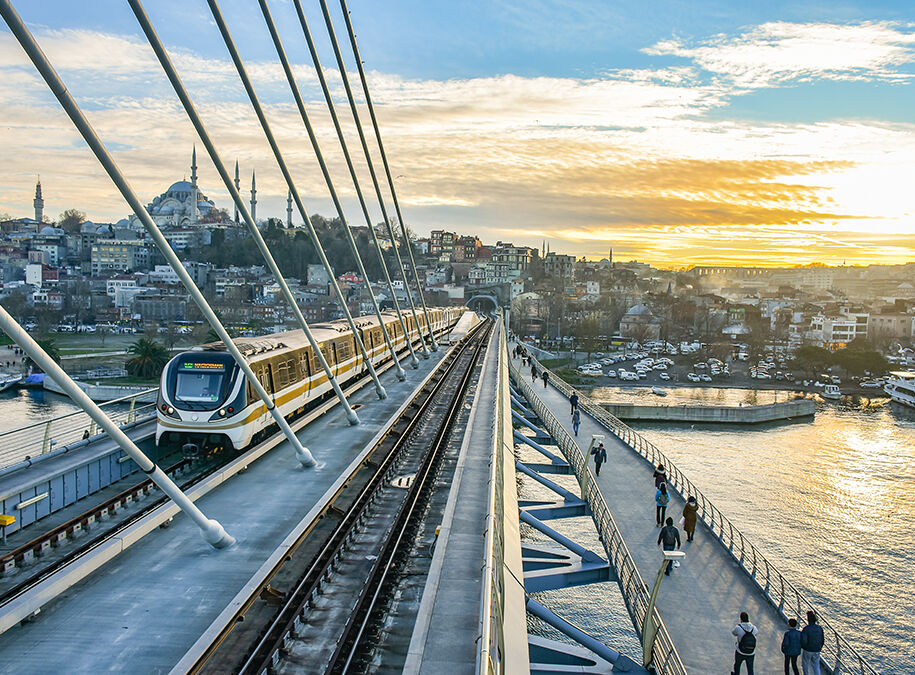 The M3 metro line was first opened in 2013. It’s on the European side; it’s 11km long and currently has 9 stations, it links the Kirazlı area to Bağcılar. The M3 is the start of a new wave of accelerated projects made by the government in recent years in order to improve the transportation infrastructure of the city and meet the growing need due to the rapidly increasing population.

The M4 is the first rapid metro line of the Asian part of Istanbul, construction started in 2008, and the project opened for public use in 2012. It runs between Kadıköy and Tavşantepe through 19 stations and a total of 26km. The M5 is also on the Asian side, it goes from Üsküdar to Çekmeköy, serving 16 stations on 20km. Construction began in 2012, and it opened in 2017; this is the first self-driving metro line in Turkey. All stations of the M5 have protective barriers with automatic doors, opening only when the train stops at the platform. The next metro line is the shortest among all Istanbul metros, the M6 is only 3.3 kilometers, and it connects you to Hisarüstü/Boğaziçi University from the M2 Levent metro station.

Our next metro line is the groundbreaking M7 metro, the most advanced metro line in Istanbul. It’s officially referred to as the M7 Kabataş–Mahmutbey metro line. Its current length is estimated at around 24.5 kilometers and it covers 19 stations with plans to cover 12 more. It cost around $1 billion to make. Construction of the project first started in 2014, and it opened for the public in October 2020. As of November 2021, the metro line operates from Nurtepe to Mahmutbey, while the rest is temporarily closed due to construction. If you have invested in property somewhere along with this metro or you’re planning to invest, don’t worry about getting to central regions of the city; there is a free bus service that is currently working, connecting Nurtepe to Mecidiyeköy. This is also a highly advanced self-driving metro with protective barriers and exquisite architecture. 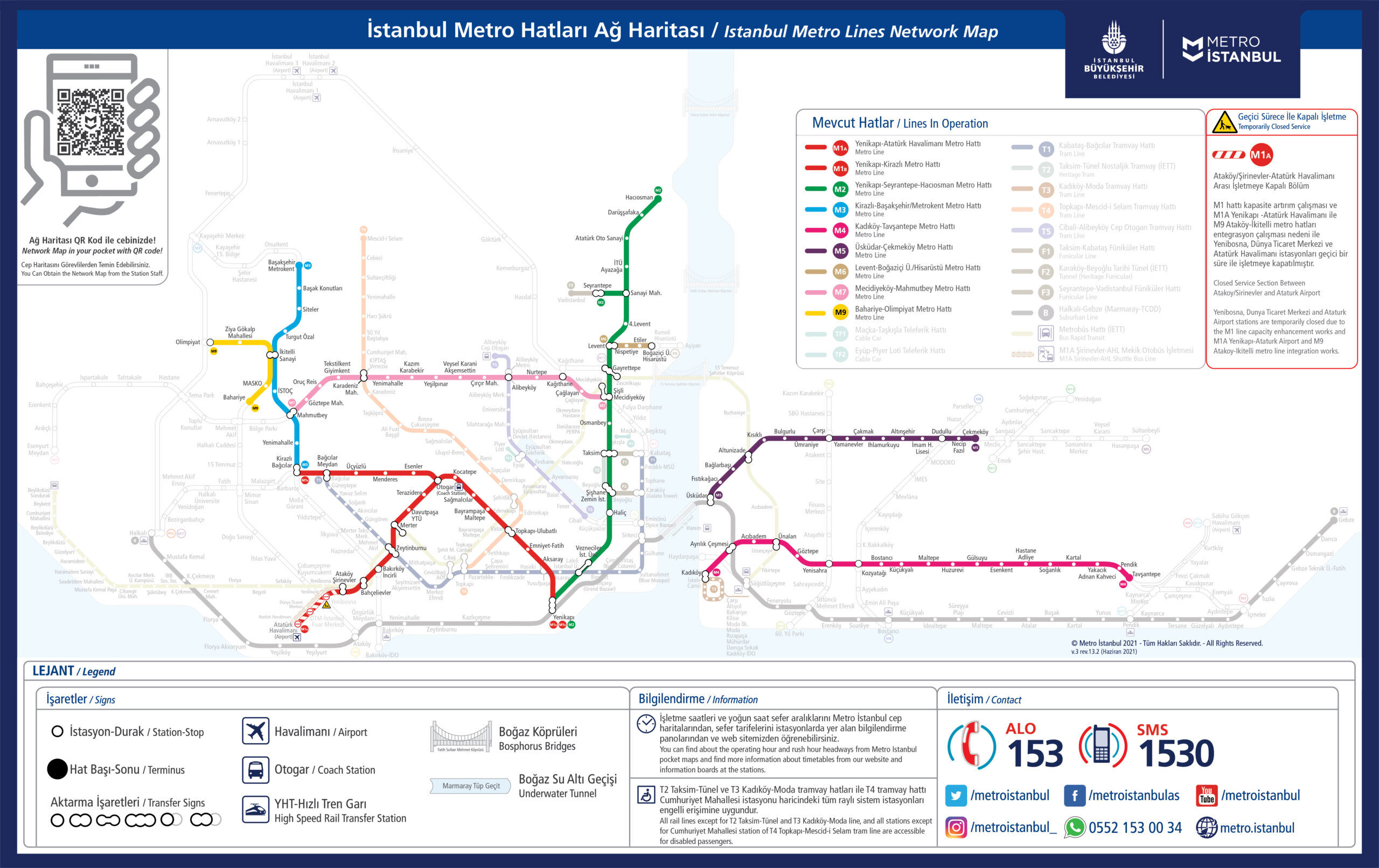 The M9 metro line comes next on our list. It’s on the European side, and it links Ataköy to Olimpiyat, but not all of it is yet working. In fact, 9 out of 14 stations are currently under construction. Construction began in 2017, and it has been partly operating since May 2021.

We can say that the M9, like many other public transportation projects in Istanbul, is still a work in progress. In fact, not only most of these metro lines are being extended, but entirely new lines are also being built while other are being planned. If you want to know more about the future of the metro infrastructure of the city of Istanbul, we suggest you check out our new article about the the upcoming metro lines in Istanbul. 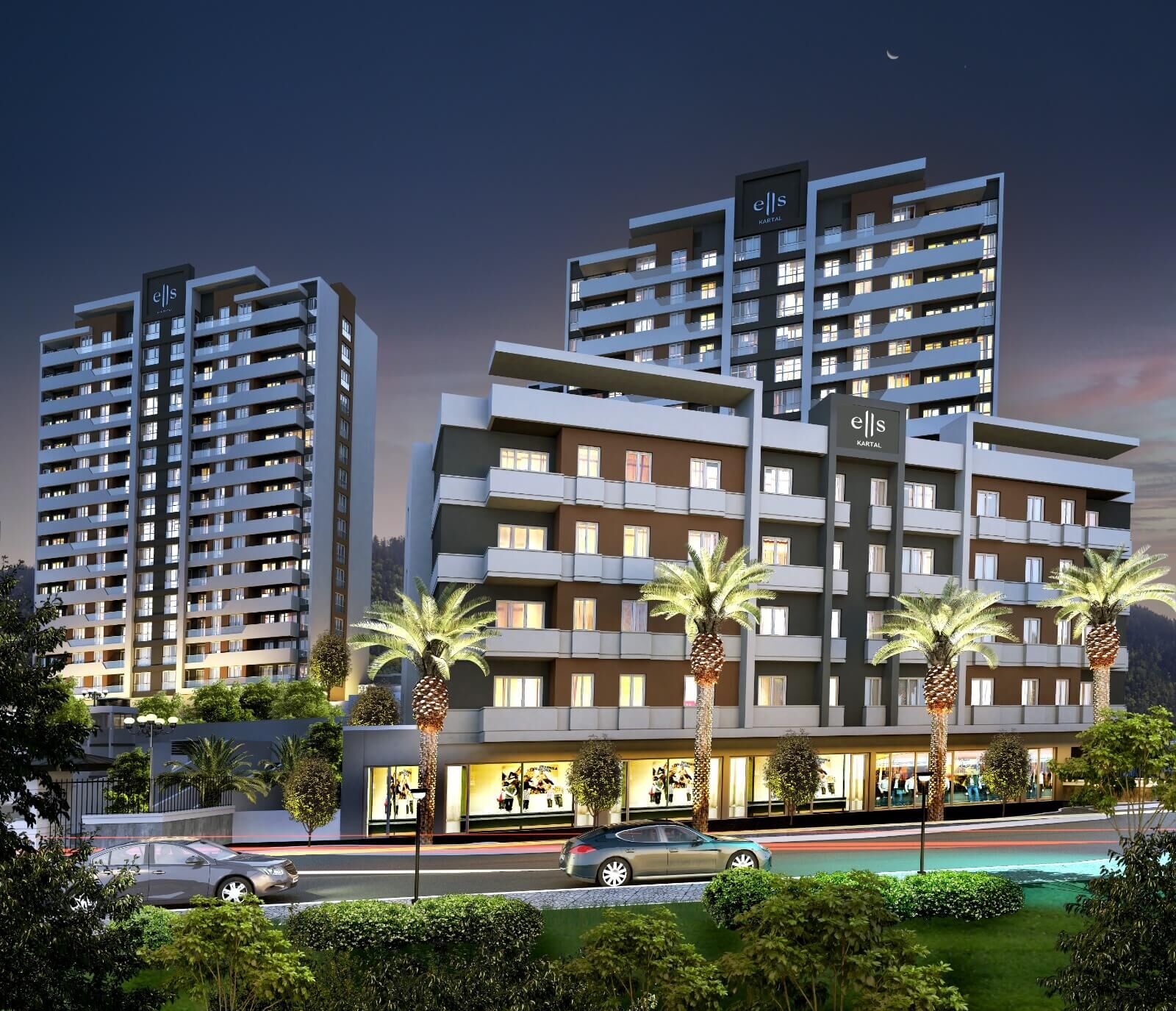 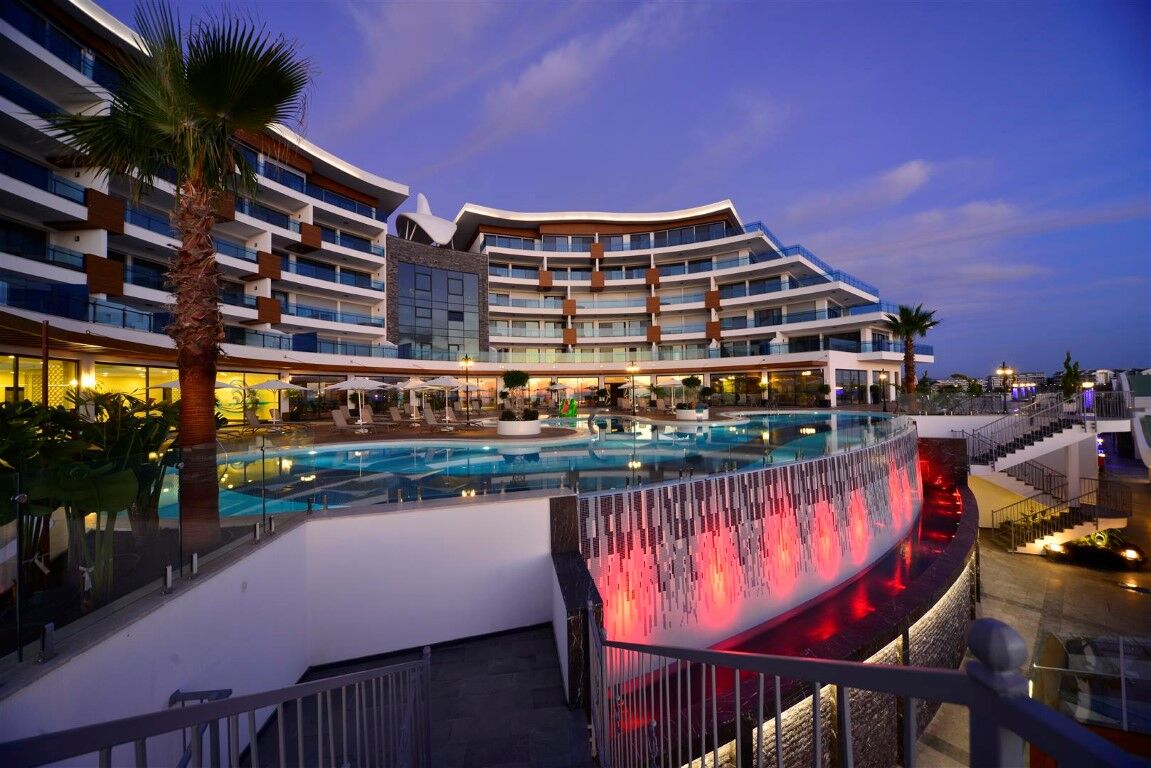 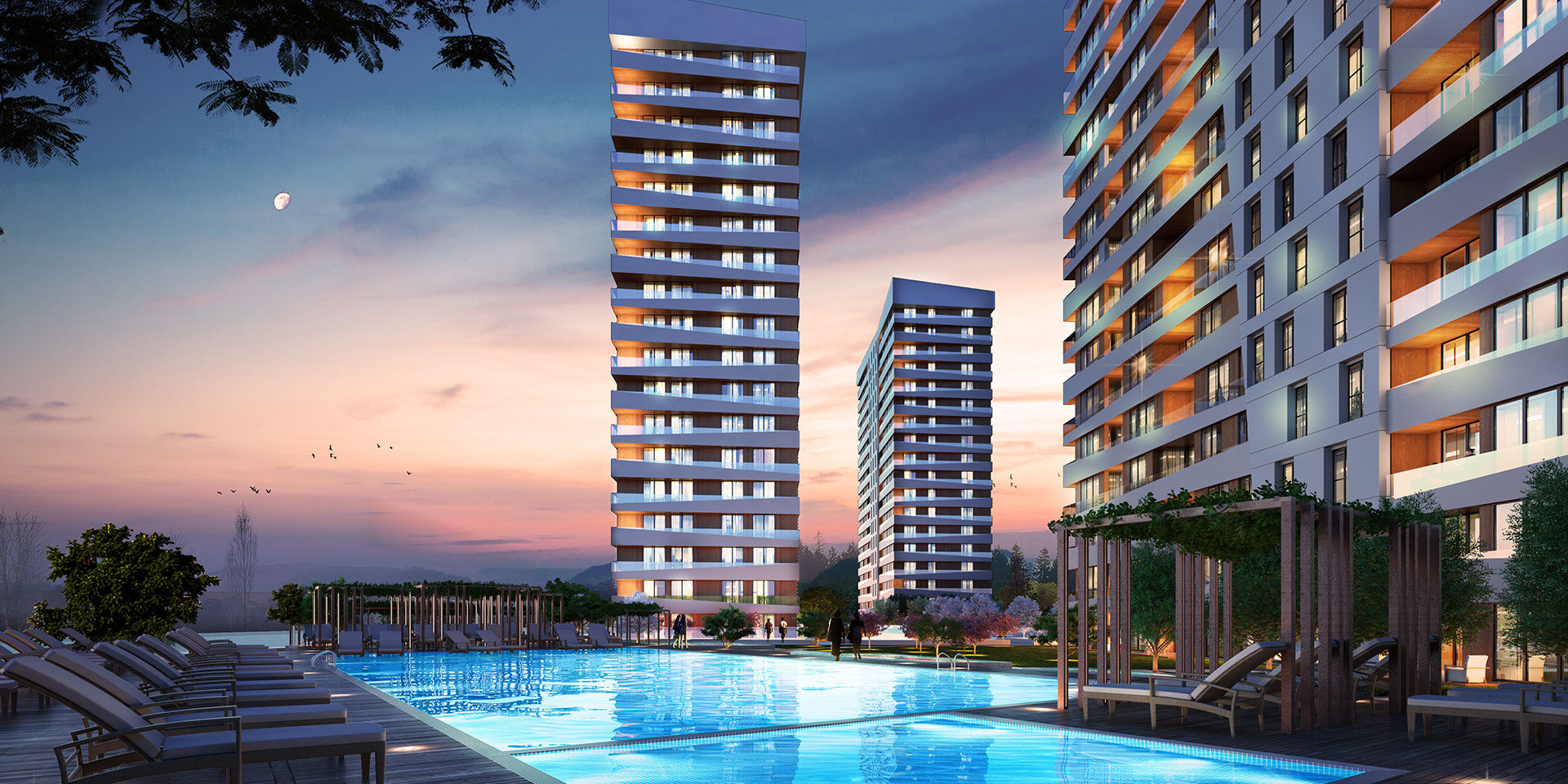